The company’s largest division had 25,000 employees, and its management was particularly concerned about the success of the reorganization as well as its impact on productivity and employee morale. Realizing they needed to enlist the employees’ support in order to make the reorganization successful, the division’s management turned to Arbinger for a solution.

“Immediately there was an increase in quality as a result of the Arbinger process. In meetings together, there was less division, there were no feelings of protectionism, and there were fewer boundaries between people as to who could speak and who had a voice. We all feel like we’re on the same team now, because everyone feels like they have a piece of what’s going on. Everyone is doing their job because they feel empowered.”

The work with the division began with training conducted jointly by Arbinger and internal company facilitators who had been trained by Arbinger. This training was followed by three implementation workshops held at one-month intervals and conducted by Arbinger consultants. Virtually all of the division’s 3,500 managers completed the Arbinger training. Following this training, team managers were provided with advanced training, teaching plans, workbooks, and videos to further drive the Arbinger way of working within their teams.

Following the Arbinger intervention, division managers reported significant process improvements in a wide variety of areas. They reported that the division—which had been characterized by feuding, competition for limited resources, and conflicting objectives—was now moving toward an environment of collaboration, resource sharing, and harmonized objectives. They attributed this to the fact that the Arbinger ideas provided common ground on which to identify and solve problems in a very difficult environment. According to one manager, “There is a tremendous change in the company since the Arbinger training—more respect, more follow-up, and a higher level of trust.... I have never felt better.”

Importantly, this change was felt at even the most senior levels. One corporate officer noted, “Things are much different now on the senior team; we respect and honor one another more than ever before. We have sincere mutual regard. People are willing to forgive mistakes. Once, I lost my temper at someone and then apologized.... We talked things over and when we were done, the issue was completely settled. Before, this kind of thing could have lasted years.”

Managers also began taking greater initiative and, in an environment where the possibilities appeared limited, found creative ways to serve the division’s customers. Employees at all levels became more attentive to others’ specific needs and started taking initiative and personal responsibility for meeting those needs. This help was not confined to work issues, but extended to helping fellow employees who were affected by the reorganization. Employees rallied to support one another by sharing job postings, coaching each other on interviews and resumes, and providing formal and informal managerial training.

Arbinger’s work also had a strong, positive impact on employees’ morale and well-being. Many reported feeling more in control of their lives and better able to cope with the changes taking place in the company. They also reported less stress, less anxiety, and increased ability to deal with common problems. Because of this, work satisfaction among employees increased by 20%. One of the senior managers said, “The Arbinger training has saved my career. I would have left or been forced out of the company had I not gotten control of my attitude and developed new ways of being with people. It has allowed me to make a contribution to the company I otherwise was not prepared to make.”

Results of the company’s internal employee survey helped quantify the impact of Arbinger’s work when the responses of employees with whom Arbinger worked were compared to the responses of employees with whom Arbinger did not work. Despite the fact that this survey was conducted more than a year after the Arbinger intervention, those who worked with Arbinger responded more favorably on all questions (see chart below). As a result, despite the difficulties posed by the reorganization, work groups experienced gains in productivity and customers’ needs were proactively anticipated and met. For example, one regional operations manager remarked that, “Without the Arbinger training, I don’t think I’d be able to get any good work from my people at this point. But in spite of the reengineering decisions that are beyond my control, we’re doing some pretty good stuff.” This was not only felt within individual units, but across the division as a whole, leading a corporate officer to say, “We’re getting a lot more done, and we’re doing it a lot faster now.”

Because people at all levels were working more effectively together, business results dramatically improved. The division president reported, “As a direct result of implementing Arbinger’s process and human technology, at the very time we were going through massive organizational changes and downsizing, we delivered the product our company depends on for its revenue more efficiently, at lower cost, and with higher quality than ever before, as measured by the following: 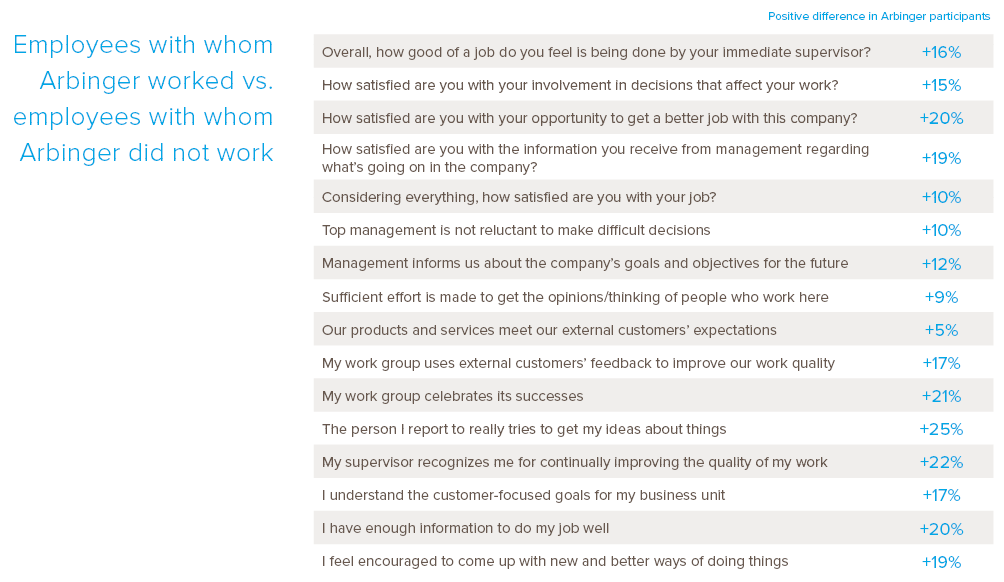